Video Tutorials with Camtasia for Mac

OK, I made that last part up. But you get the idea. When it comes to creating rich learning materials, a well done video can often make a concept or procedure very clear.

Until a few weeks ago, the offerings for Mac screencasting software were sparse. While Snapz-Pro and ScreenFlow did allow you to capture screen movement on your Mac, they were limited in their ability to edit.

Now, TechSmith has released its Camtasia product for the Mac. Camtasia allows you to capture screen movement and voice, and then bring these captures into a relatively robust editing environment to create cuts, transitions, callouts, titles, and more. The interface is reminiscent of iMovie, with it’s simple and friendly look and feel. The video and audio editing is done on a timeline at the bottom of the interface. The play window is in the upper right. The media storage, transitions and filters are located in the upper left. 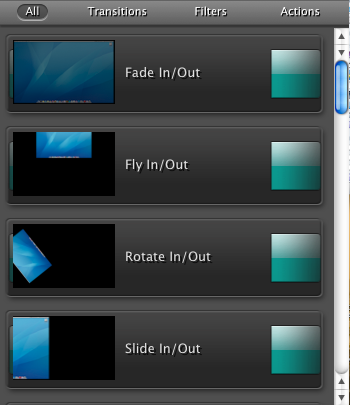 The selection of transitions, filters and actions are in the upper left.

If you’ve done any work in iMovie or FinalCut, Camtasia should be easy to get up and rolling within an hour.

One of the greatest strengths of Camtasia over most of the competition (including Adobe’s Captivate on Windows) is the vast selection of output formats.

The Advanced Export option lets you export into a wide variety of output formats, including various flavors of QuickTime formats, with full control over output parameters via the Options button.

The large selection of export options.

Given the prevalence of video enabled mobile devices, I’m especially pleased to be able to output to the .m4v format for playback on iPod/iPhone devices.

This is version 1.0 of Camtasia for the Mac, so TechSmith will likely be fine tuning and adding features as this software matures. One thing I’d like to see is built-in captioning. But for now, you can’t beat this feature-set and the $99 debut price.