Using Your Mac As A Wireless Router

If you’ve recently purchased an iMac, chances are that it came with Airport wireless built in. If you have cable or DSL service, but have yet to purchase a wireless router, then you’re in luck. You can turn your iMac into a wireless router for your home or small office. Here’s how:

First, here’s a basic diagram of what is needed. 1) A cable or DSL modem, which typically provided by your internet service provider; 2) a Mac (with built-in Airport wireless) which is connected to your modem via an ethernet cable; and 3) any number of laptops which have wireless capability.

Next, you will need to configure the Mac (connected to your modem) to share it’s internet capability to wireless devices. To do this, open your System Preferences and click on Sharing. 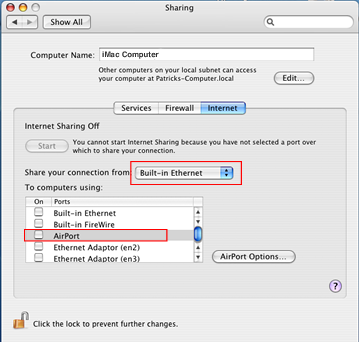 Then click on the Airport Options… button to configure some wireless security options. You don’t want to be sharing your wireless connection with the whole neighborhood.Here, enter a WEP password which will be required from the laptop wishing to join your new wireless network. I have found this to be an excellent solution for folks who don’t have a wireless router, but would like occasional wireless access in the home or small office.

NOTE: (5-15-07) Some of you have expressed some difficulty when trying to join a non-Mac device to this wireless setup. Apparently, there are some issues around which encryption scheme you choose. Take a look at this Apple Doc for some possible answers: WireLess Encryption