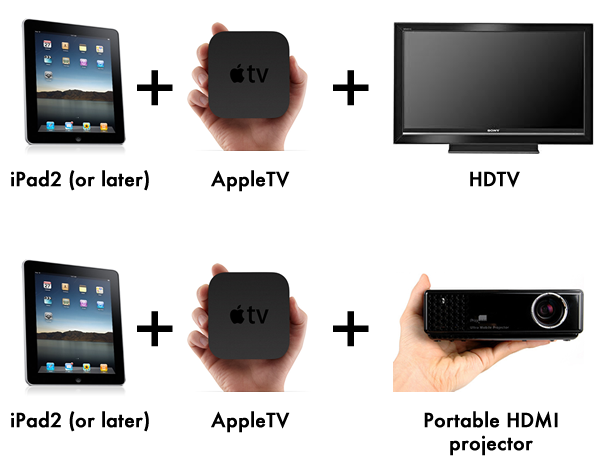 I’m using my iPad2 more and more for business.

I haven’t found the additional features of the new iPad compelling enough to buy one. Since Apple dropped the price of the iPad2, I find these to be even more attractive for most folks. The new iPad’s faster chip and higher resolution display may be more targeted towards gamers. But I don’t often use my iPad for games.

I do find that I’m using the iPad to do more presentations in meetings. Often in these meetings, several people have iPads and want to present referenced content to an HDTV in a conference room. In these cases, passing around an HDMI cable is awkward and time consuming. Now, there’s a better way.

Apple TV ($99) and AirPlay allow you to wirelessly mirror your iPad’s screen to an HDTV or any HDMI-capable display (like a portable HDMI projector). The setup is easy and relatively quick.

The first thing to do is to set up the Apple TV for AirPlay, Apple’s wireless streaming technology. To do this, connect your AppleTV to an HDTV (or HDMI projector) via the HDMI cable. Once in the Apple TV menu system, navigate to the Settings menu.

Then navigate down to the AirPlay selection. There you can toggle on or off the AirPlay service, and you can set a password for connecting a device to your Apple TV. (Setting a password is highly recommended.)

The iPad and the Apple TV must be on the same wireless network. To do this, select Settings, then General, then Network, then select Configure Wi-Fi. This screen will display the available wireless networks. Click to join the desired network.

The last step is to join the same wireless network on the iPad, and then to turn on AirPlay with mirroring.

On the iPad, go to Settings, then Wi-Fi and choose the same wireless network you joined on the Apple TV.

Once the network is joined, you need to turn on AirPlay. To do this, double-click the Home button on the iPad. This will bring up a list of recently used apps along the bottom of the screen. Scroll to the far left of this list. There you will see the AirPlay icon.

Click on the AirPlay icon to reveal the Apple Tv on your network. Under the Apple TV will be the option to toggle on the mirroring setting. Once this is toggled on, your HDTV (or HDMI projector) will begin displaying your iPad screen.

The iPad in Business

So, now you can imagine a meeting in an HDTV-equipped conference room with participants on iPads, all joined on the same wireless network. As each person presents, they toggle on the mirroring option on their iPad. When done, they toggle off, and the next presenter toggles on.

I’m excited about this method of presenting with the iPad. The weight of an iPad and Apple TV is still less than a laptop. The convenience of presenting wirelessly is huge.

NOTE: It appears that Apple’s next OS (Mountain Lion) will allow this same type of mirroring via AirPlay from your laptop.