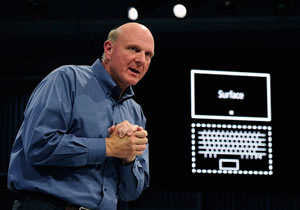 MicroSoft is building their own tablet? Really?

I almost don’t even know where to begin here. Does anyone remember the Zune? That epic hardware fail and “Johnny come lately” approach should’ve been a proper lesson for the folks in Redmond. But apparently not. Balmer has been at the helm since 2000 and has learned nothing.

I have to admit, I wasn’t crazy about the name “iPad”. All feminine napkin jokes aside, it was still a weak name. However, I’m not sure that a more shallow name could have been conjured up than “Surface”. Add to that the fact that MicroSoft’s Surface tablet is, at this point, really nothing more than speculation. It’s nothing more than rumors of vaporware.

Then, there’s the destroyed relationships with other tablet makers, the miserable state of MicroSoft’s operating system these days, and the very real PR and marketing problem of this looking like an act of desperation by an obsolete giant, and you have the makings of perhaps the greatest of MicroSoft’s epic fails.

For all you traders out there, you may want to either sell or short MSFT (30.7) now while you can.