Apple’s iPhone OS: It’s No Flash in the Pan 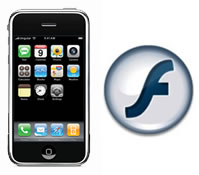 Anyone still out there that doesn’t yet realize that Apple has become quite savvy about design, development, marketing and business strategy, is clearly brain-dead.

Apple’s new developer agreement stipulates that “applications that link to documented APIs through an intermediary translation or compatibility layer or tool are prohibited.” That pretty much means that Flash is prohibited as a development tool for the iPhone/iPod/iPad. This takes much of the wind out of Adobe’s CS5 announcement and the Packager for iPhone tool.

It’s clear that Apple will no longer tether itself to any technology that may impede (or potentially impede) it’s innovation and growth. Apple may lose a few developers, but even the angriest of developers here know that this loss will be insignificant to Apple.

It’s projected that by the end of this year, there will be more than 100 million iPhone OS devices in the wild. If you are running a content site that doesn’t support this OS, there are 100 million reasons why you may be out of work.

Flash’s days are numbered… HTML5 will be the final nail in the coffin.