Don’t Be A Twit: Tweet Well With These Tools

While you may have an opinion about the relative value or benefit of Twitter in the social networking sphere (see this funny spoof of Twitter), there’s no denying that “tweets” are quickly becoming a major form of online communication.

On some level, it makes perfect sense. In our multi-tasking, multi-communication world, the pace continues to quicken. Why wade through several multi-paragraphed blog posts each day when you can get the gist of the matter with a brief 140-character-or-less tweet? And better yet, you don’t even have to be at your computer to get them.

I’ve had many family and friends ask me about how to use Twitter. So, putting the interesting social and anthropological discussions aside for now, I will share the tools that I currently use to broadcast and receive the millions of tweets in the Twittersphere.

Twitterific
If you want a great, lightweight app that helps conserve screen real estate, you may like Twitterific. The interface is simple, easy to use, and lets you both read and publish tweets. 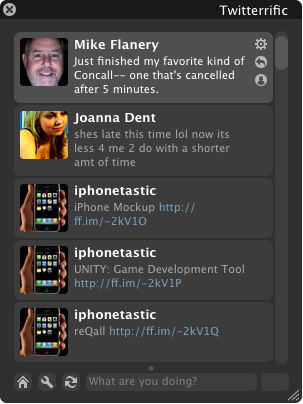 TweetDeck
Twitterific is great for simply reading and publishing tweets, but it doesn’t do much in the way of filtering or organizing your Twitter world. For that, I use TweetDeck, which runs on Mac, Windows and Linux platforms.

TweetDeck’s strength is in it’s ability to filter, organize, read and publish tweets and manage FaceBook contacts all in one application. And, it’s free! 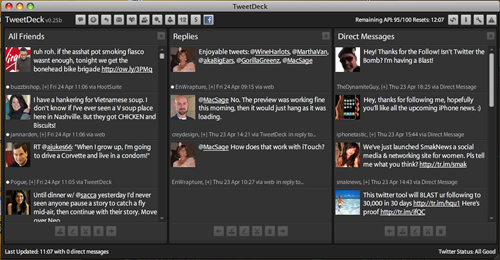 This app packs a lot of features into a simple, easy-to-use app. 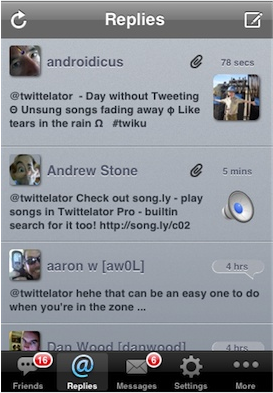 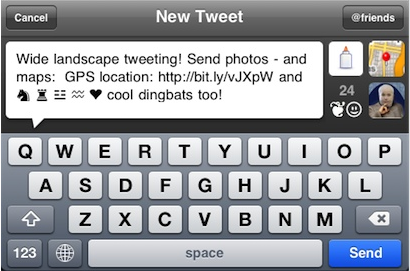 Twittelator lets you easily send pictures, show your current geo-location, add 100s of dingbats to your message, and much more. The landscape option for publishing new tweets is especially nice.

Twitter Related Sites
There are a number of very interesting sites related to the world of Twitter.

TwitterFall
One of my favorites is called TwitterFall. TwitterFall lets you filter the tweets of the world according to your predefined keywords. In the left bar, you can define keywords that show up in tweets around the world. Then, TwitterFall begins streaming those tweets as they come in (they fall, one on top of the next; hence TwitterFall). Some of the more popular keywords come fast and furious, so TwitterFall allows you to control the rate at which they fall onto the main page.

In this example, I’ve set the keyword to “Mac” and the speed to a .5 second interval between each tweet: 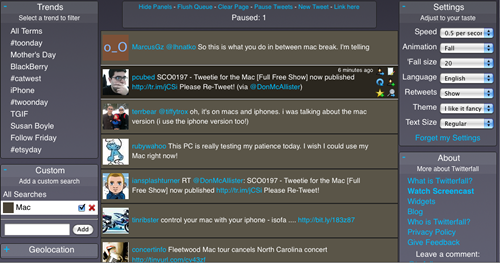 TwitterFall is a great tool for getting a window into the kinds of activity occurring in the larger twittershpere.

Twitterholic
If you want to get a quick tally of the top 100 Twitter user based on number of followers, go to Twitterholic. You can even enter your own twitter account and see where you rank in the grand scheme.

TweetStats
If you’re interested in knowing how much and when you use Twitter, go to TweetStats and check your numbers.

These are a few of the Twitter related apps and sites that I use on a regular basis. But the Twitter world is evolving quickly, and there are likely to be new and innovative ways to extend Twitter and other twitter-like apps.

One relatively new and related idea is 12SecondsTV. It’s like Twitter, only with video. Check it out.